So now it appears that the mobile space is catering for both sexes rather than one smartphone for all as apparently HTC is coming out with an Android smartphone that has been designed specifically for women on the Verizon network.

According to an article over on Phone Arena by way of This Is My Next, the new Android smartphone being worked on by HTC and Verizon is called the HTC Bliss and would be the first Android device with a focus on the fairer sex.

Apparently the HTC Bliss will come in a shade of green with a “soft-touch” rubber casing and 5 millimetres thinner than the T-Mobile G2. Word is the HTC Bliss will also sport shopping and calorie counting orientated applications.

Furthermore there seem to be accessories already for the HTC Bliss such as a square shaped speaker for a car, a Bluetooth headset matching the design of the HTC Bliss, and a wireless charging dock with speakers.

Another Bliss accessory is what’s being called a “charm indicator” and is a cubed box with a hook to attack to a girl’s purse that lights up when the user misses a message or call, and apparently is attacked to the HTC Bliss via a cable.

Now obviously both HTC and the Big Red are keeping quiet on this one, so that’s about all that’s known for now. So do you think it’s a good move by HTC to bring out a woman specific Android device? Not that it would stop a guy from purchasing one if they really wanted to. 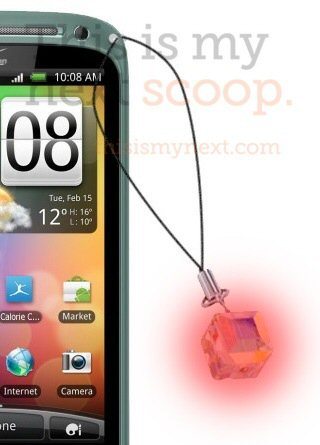 One thought on “Android HTC Bliss the Female Only Phone”