During BlackBerry World 2011, Research In Motion announced and released a new Facebook application for the BlackBerry PlayBook, and is the first Facebook app that has been optimised for tablet devices.

And the guys over at Mobile Burn got hold of the new Facebook app for the BlackBerry PlayBook and loaded it onto their tablet and videoed it in action, which of course we have for your viewing consideration below.

The video runs for almost five minutes and delivers a quick run down of the new Facebook app on the BlackBerry PlayBook, which the guys say although is optimised for tablets, the app still leaves a lot to be desired as there is still a large amount of white space unused,

Facebook chat is in the app and apparently works well and scrolling news feeds and lists is smooth although the app lacks check-ins to Places and Events. I’ll leave it right there otherwise I will spoil you viewing of the footage.

So head on down, hit the play button and check out Facebook on the BlackBerry PlayBook, and feel free to voice your opinions of the new app after you have watch the video to our comments area below…enjoy. 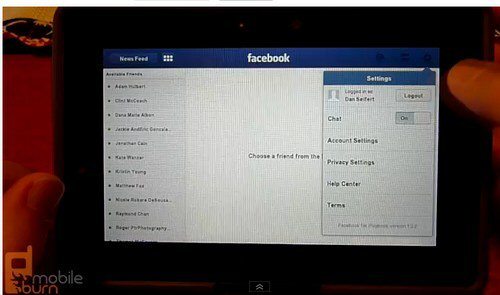