Droid Charge Offered For $199 By Amazon

If you have been considering picking up the latest 4G enabled Android smartphone on Verizon, the Samsung Droid Charge, but have been somewhat put off by Verizon’s steep 300-buck price tag, you can now get the Droid Charge cheaper from Amazon Wireless.

According to the guys over at the Boy Genius Report, Amazon Wireless has entered the undercutting game and is now offering the Samsung Droid Charge at a rather tempting $199, which is one seriously good saving.

According to the guys the Amazon $199 deal for the Android 2.2 Froyo smartphone is for a limited period only, but Amazon hasn’t mentioned any closing date for the deal.

So if you have been holding off snapping up the Samsung Droid Charge so you can play nice on Verizon’s 4G LTE network, you can now hit up Amazon Wireless and shell out 100-bucks less, so what are you waiting for? 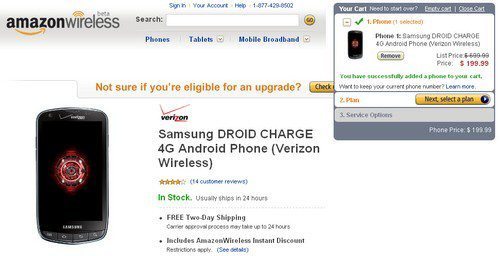