As of yesterday the HTC Flyer WiFi only tablet hit Best Buy and the Android 2.3 Gingerbread device is the first tablet from HTC, and if you are thinking about picking up the 7-inch slate we have an unboxing video for your viewing pleasure below.

The unboxing of the HTC Flyer comes our way courtesy of Noah Kravitz over at Technobuffalo and delivers just over seven minutes of Noah unwrapping the tablet and having a quick first look play with the device, including the stylus, or magic pen.

Apparently Best Buy is offering the HTC Flyer for $499.99 but there is no official pricing for the magic pen yet but apparently rumour has it the stylus could command a hefty 80-buck tag although carrier versions of the tablet may bundle the pen with the device.

I’m sure anyone who is interested in picking up HTC’s first Android tablet will already know what the device offers spec wise, such as a 5 megapixel rear camera and 1.3 megapixel front facing camera and HTC Sense so I wont go over all those details again here.

The main bugbear with the HTC Flyer for many is that it doesn’t run the tablet centric Android 3.0 Honeycomb OS as HTC opted to go with Gingerbread, so we’ll have to wait and see if the Flyer can compete with the Honeycomb big boy, until then check out the unboxing video below…enjoy. 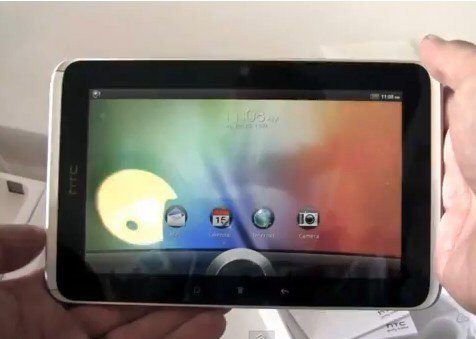