You may or may not be aware that Barnes & Noble have now officially announced the new touch enabled Nook, a compact 6-inch ereader, and just so you can get to find out more about the B&N Nook we have a little hands-on video for your viewing pleasure below.

The hands-on with the Barnes & Noble Nook video comes our way courtesy of the guys over at This Is My Next who have done an article over on their website giving their impressions of the device along with numerous pictures and this video.

The guys say that the new Nook feels “insanely light” at 7.48 ounces, and its rubberised, contoured back makes it comfortable in the hand and is slightly thicker than the Amazon Kindle. The B&N Nook is primarily touch screen but does have a menu button under the display and a power button on its rear.

As for the software, the guys say the Nook is on top of Android 2.1, but apparently the user wouldn’t know it, and the device has a similar UI to the original and the Nook colour. I’ll leave it right there and let you head on down to check out that hands-on video…enjoy.

Are any of our readers considering picking up the new Barnes & Noble Nook once it becomes available? 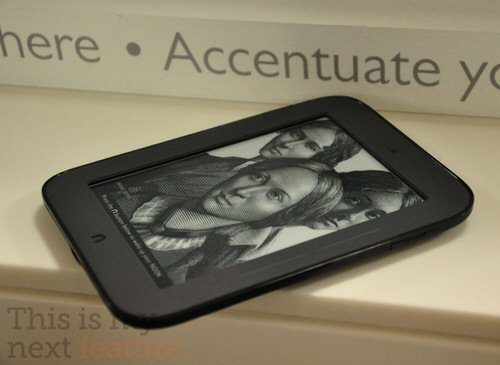 One thought on “B&N Touch Enabled Nook Handled on Video”