You may or may not be aware that Apple uses a 256-bit hardware encryption as protection for iOS 4 devices, and iPhone users have been safe in the knowledge that their data was protected, as the encryption was too strong; how apparently that has now changed because a Russian company claims to have cracked that encryption.

According to an article over on Geek, Russian firm ElcomSoft (PDF), a corporate security and audit firm claim they have now managed to crack Apple’s iPhone encryption and opened up any data stored on and device running iOS 4, and furthermore is offering the software that achieves the crack to anyone.

Apparently ElcomSoft works with intelligence agencies, law enforcement agencies and the military to perform forensics and data recovery on devices. The crack allows the user to fully access whatever is stored on such Apple handsets as the iPhone 4, including browsing history, call history, emails, texts, usernames, geological info, passwords and even deleted data.

The company achieved the iOS 4 crack by creating a toolkit that enables the extraction of encryption keys from any device and with said keys it was possible to decrypt an image taken from an Apple iPad, iPod Touch or iPhone allowing a forensic tool like Guidance Encase or FTK to delve deep into the iOS data.

Apparently ElcomSoft is making their iOS 4 forensic toolkit available to law and security agencies however the software called ElcomSoft Phone Password Breaker can be purchased by anyone at a cost of $350. 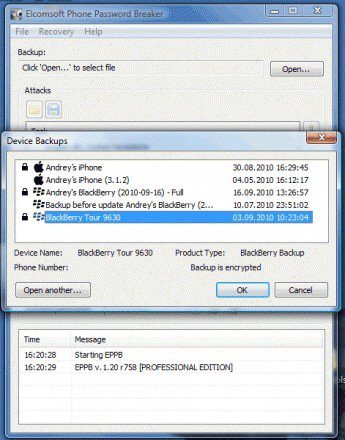