Now everyone know just how successful the multi-platform mobile game Angry Birds is, but it appears that T-Mobile wanted to take playing Angry Birds a step further, and came up with some smartphone controlled live play of Angry Birds, and we have a video to prove it for your consideration below.

The T-Mobile Angry Birds Live video comes our way courtesy of the guys over at Daily Mobile and by way of YouTube user LifeisforsharingDT, and delivers almost two minutes of live Angry Birds playing action.

The Angry Birds Live game was held in Barcelona and for the first time ever you can see people using a smartphone to control live play of a life sized version of Angry Birds which includes exploding pigs and shooting birds accompanied by the by now famous Angry Birds theme tune.

No much else to say than this was done rather well, so head on down and mash that play button to check out some real life Angry Birds gaming action, great fun…enjoy. 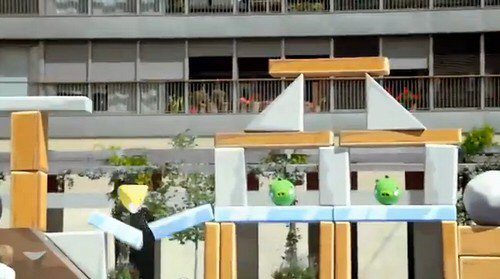