So we though we’d do a bit of hunting for our UK readers to deliver a bit of a price comparison for the Samsung Galaxy S2, and have check out the top UK carriers offering the Android 2.3 Gingerbread device for the best price deals.

So from what we have found by our searching, it appears that the best price for the Samsung Galaxy S2 in the UK is from O2, coming in at Â£29 per month based on a two-year contract depending on what extras you desire from the carrier.

Three UK seems to be the next cheapest where you can snap up the Galaxy S2 for Â£30 pre month on a 24 month contract, and are followed by T-Mobile who offer the Android handset for free for Â£35.75 per month again on a 2-year agreement.

Orange UK offers the Samsung Galaxy S2 as a free handset when purchasing their Dolphin 40 plan, which costs Â£40 per month when signing up for the usual two-year contract.

Vodafone unfortunately comes last, as although you can still get the Galaxy S2 as a free handset, Vodafone asks Â£36 per month for the device on a 2-year term.

However although Vodafone says the handset is free from Â£36 per month, on checking the lowest price on offer for a free handset looks to be Â£41 and not Â£36, as that Â£36 requires an upfront payment of Â£99 (see screenshot below). So it would appear that Vodafone has made a little mistake on their website, which I’m sure they will correct once they realise.

So there you have it the Samsung Galaxy S2 price comparison for the UK, of course these prices do depend on what you are looking for in the way of voice, texts and internet, but if you happen on an even cheaper price for picking up the Galaxy S2 feel free to let us know by giving us a shout in out comments area below. 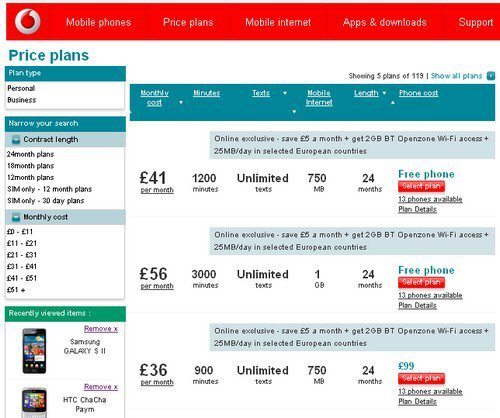