For those out there that use the Shazam Encore premium app on iOS and Android, Shazam has now released an updated version of the application that delivers a new feature called Shazam LyricPlay that delivers the lyrics for over 25,000 songs and was made possible by Shazam’s first corporate acquisition of synchronised lyric tech from Tunezee.

The new Shazam LyricPlay feature in Encore premium app auto-syncs lyrics with a music score, and creates a more interactive experience that enables users to move beyond just discovering a song’s title artist and other info as they can now also view the lyrics along with visual themes in sync with the music.

The CEO of Shazam, Andrew Fisher says, “Shazam leads the marketplace for mobile discovery and we constantly strive to develop even greater consumer experiences. We are committed to make the necessary investments to build or acquire innovative technology in order to enhance these experiences as we continue to innovate and enhance the world’s leading mobile discovery service.”

With Shazam LyricPlay users can tag any song they like, activate LyricPlay by a simple tap of the icon when it shows in the tag, and halt LyricPlay by tapping the lyric for options to return to the Tag result for said song.

The new Shazam LyricPlay in Encore feature is launching first in the US and Canada and followed by the UK, Germany, France, Spain, Italy, New Zealand and Australia, and is a free feature available for the iPhone and iPod Touch within the Shazam Encore and Shazam RED apps that can be purchased from iTunes, and for Android devices from the Android Market. 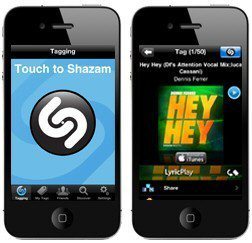