Owners of the HTC Thunderbolt on Verizon have been patiently awaiting the arrival of the Android 2.3 Gingerbread update to hit their smartphone and with it bring a fix for the problems many Thunderbolt owners have been experiencing and the word was that update would arrive in the second half of June, and now apparently we have a hard date for the OTA update for you.

According to an article over on Unwired View the guys over at Android and Me have got hold of a couple of Verizon screenshot of the OTA update, which reveals that the Big Red has scheduled the over-the-air Android 2.3.4 Gingerbread update for the HTC thunderbolt for the 30th of June.

The roll out of Android 2.3.4 Gingerbread should fix any issues that were experienced by HTC Thunderbolt users after installing the previous update. Apparently the insider source does say that there could be a “small change” to the release notice, but is adamant that June 30th will remain the firm OTA roll out date.

So there you have it, if all goes according to schedule HTC Thunderbolt owner should be able to snap up Android Gingerbread for their handset on the 30th, which isn’t that far away is it. 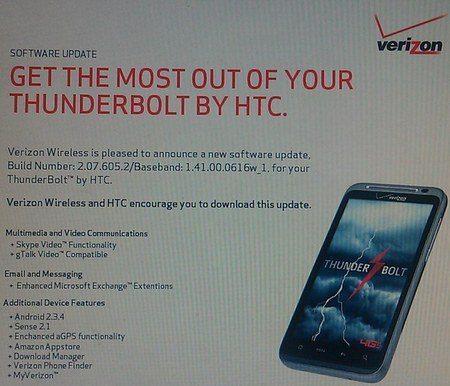