According to the guys over at Unwired View by way of Engadget, the Vizio Android tablet will come out to play sporting Android Gingerbread, so not really in the same league as Android 3.0 Honeycomb tablets, but more in line with the HTC Flyer.

Anyway, the Vizio Android tablet sports a custom interface similar to Vizio’s Internet App Plus system but apparently are prepared to upgrade to Android 3.0 Honeycomb if they thing it is stable enough on their tablet.

As for those specs, the slate has an 8-inch display, IR controller for doubling as a remote for your TV and VCR, a front facing camera of some description for video chat, and HDMI out.

Price wise you can expect to hand over $349 for the Android tablet that will apparently become available at some point next month. So anyone actually thinking about picking up the Vizio Android tablet once it hits? 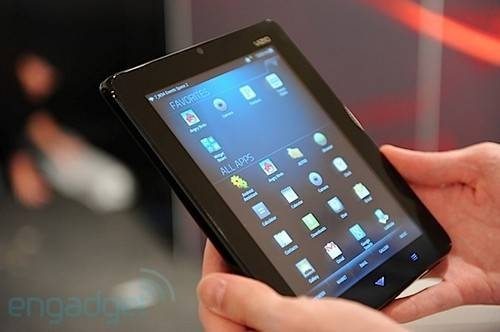