HP WebOS TouchPad Reviewed On Video: Worth Your Cash?

You are probably aware that the first webOS 3.0 tablet, the HP TouchPad became available as of the 1st of July, but if you are still pondering on whether the tablet is worth the asking price perhaps a nice in-depth view review of the HP TouchPad may help you to come to a decision, so that’s what we have for your viewing consideration below.

The guys over at Phone Arena have gone into great depth over five pages in a written review of the HP TouchPad over on their website, and also put said review in video format, which lasts sixteen and a half minutes and if you don’t have time to peruse that lengthy article we have embedded the video below.

Of the HP TouchPad the guys say that the piano black tablet probably won’t win any design awards, but feels solid and is comfortable to hold. The HP webOS slate packs a 9.7-inch IPS display with a 4:3 aspect ratio and 768 x 1024 pixel resolution, which is the same as the Apple iPad 2, however the display is somewhat low in brightness which makes viewing the tablet outside in sunlight somewhat difficult.

Unfortunately the HP TouchPad only comes with a singer camera, a 1.3 megapixel front facing snapper, while most rival tablets offer a rear-facing camera as well. Either side of the camera sits a speaker while on the top edge can be found the small power button, microphone and 3.5mm jack.

Powering the tablet is a Qualcomm Snapdragon 1.2 GHz APQ8060 processor, although the guys do say performance is a bit strained because of general slow down, delays and lag throughout the platform, albeit not every time.

I’ll leave you with a few pros and cons the guys came up with if you are considering purchasing the device, with firstly those pros, the HP TouchPad does deliver a great notifications and multitasking system and there are plenty of TouchPad optimised apps available from the App Catalog; however as for those cons, the display is rather dim, doesn’t have the ability to shoot videos and photos like rival tablets, and the platform does have quite a few performance issues.

So is the HP TouchPad worth your cash priced at $500 for the 16GB WiFi only version? Well head on down and mash that play button to check out the low down on the first webOS tablet so you can make that informed judgement for yourself…enjoy. 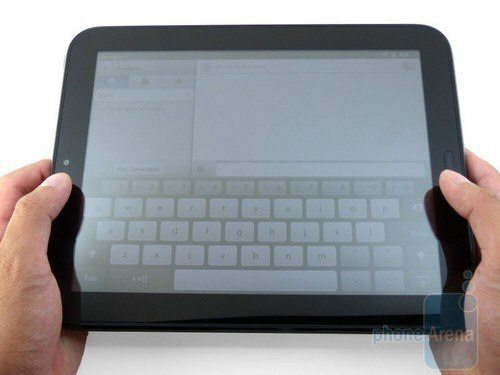