Tablet rivals set to fail unless pricing strategy changes, there are many new tablet PC’s coming to the market and pricing wars will happen, but many manufactures really needs to think its pricing strategy if they want any chance at all to compete with the Apple iPad 2.

Contenders in the tablet market need to seriously re-think their pricing strategy if they want to successfully compete with Apple’s iPad2. These competitors are pricing way above the market leader’s entry level tablet — the iPad2 which scored significantly higher in consumer awareness, consideration and expectation levels than its rivals. New research from YouGov’s latest TabletTrack confirms Apple’s superiority in the tablet market

We had an email sent into us this morning giving an in-depth look into this, the graph below is very interesting indeed.

Brands such as HTC, though successful in the smartphone market, are expecting consumers to pay too much for their tablet and could quickly fail unless they re-think their pricing strategy. Whilst YouGov recognise that there are variations in spec, particularly with 3G connectivity, brands are still pricing their tablets too high in comparison to the price of the cheapest iPad 2 model available (the 16Gb Wi-Fi only version). We found 4 brands in particular that price their entry level tablets higher than the lowest spec iPad2*- Acer’s Iconia, HTC’s Flyer, Motorola’s Xoom and LG’s Optimus

The market continues to grow with new tablets being released frequently. As demonstrated in previous research, YouGov believes that Â£250 is the price point where the tablet market will take off. Tablets will fail to be a mass-market product until the price comes down to this price point. 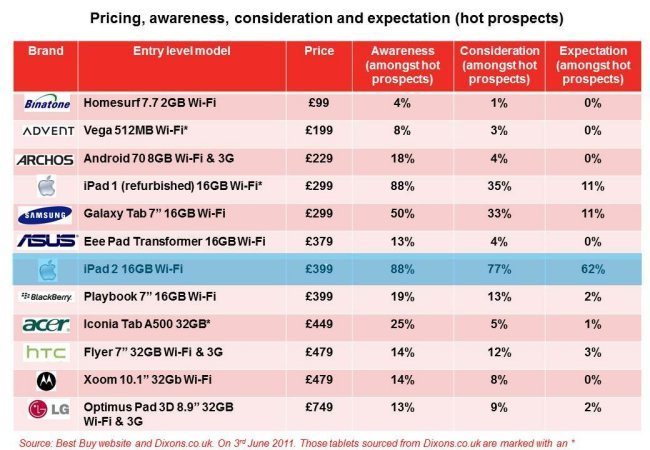 Russell Feldman, Associate Director for Technology and Telecoms Consulting at YouGovâ€¨commented on the findings: “Apple’s iPad leads the way in the tablet market and not just in terms of sales success but also in consumer expectation, awareness and consideration levels. So in order to successfully compete, brands need to seriously re-think price. Retailers also need to convince these manufacturers that outpricing the brand leader will not help their cause.”

The research reveals low consumer consideration and expectation levels for a non-Apple brand. 77% of “hot prospects” (respondents that are keen to get a tablet) will consider purchasing an iPad2 with a further 62% expecting to get one. However, the next most popular tablets are the out of date iPad1 and the Samsung Galaxy Tab both with expectation levels at 11%. Other competitors fared even worse, 3% of “hot prospects” expect to get a HTC, 2% a BlackBerry and just 1% expect to get an Acer (1%). This is the mountain Android based tablets need to climb.

Feldman continues: “Google also need to change their strategy in the tablet market.
Google’s success in the smartphone market is in part due to the OS being available to both low and high end manufacturers meaning it is accessible to all. Furthermore, high end models such as the HTC Sensation and Samsung’s Galaxy S2 are not priced as high as the iPhone meaning Google has been able to home in on Apple’s superiority in the smartphone market and subsequently overtaken them.”

The Apple dominated tablet market will be a hard challenge for most brands to overcome. Unlike the smartphone market, the Android models seem unable to challenge Apple and certainly won’t be leading the market anytime soon.

YouGov’s TabletTrack study surveys tablet usage, attitudes and satisfaction, quarterly. The next wave of the tracker begins in August with a report due in September 2011.

All figures, unless otherwise stated are from YouGov Plc. Total sample size was 3306 respondents, of which 1310 were tablet owners and 1996 nationally representative respondents. Fieldwork was undertaken between; the 6th to 12th May 2011. The survey was carried out online.

Figures taken from Best Buy and Dixons.co.uk on June 3rd 2011