iPhone for China Mobile Gets Pictured: Real or Fake?

Well it had to come sooner or later, as you are probably aware there are rumours that China Mobile is to gain the iPhone, which came about on the back of Apple exec Tim Cook paying the world’s largest carrier a visit, and thus the rumours began that China Mobile was in line for the iPhone.

The guys say that this iPhone prototype looks like it runs an unreleased baseband software sporting the version number 06.10.1 and doesn’t show an IMEI number as evaluation models don’t usually have said number just like the recently seen iPhone 4 prototype spotted up for grabs on eBay.

The guys also say that if there’s and real substance to this photo leak it could mean that Apple will deliver an iPhone 4 that has been optimised for China Mobile’s 3G TD-SCDMA network rather than delivering a full on 4G enabled iPhone as previously rumoured.

Of course the photo could be a fake, something that has been known to happen in the past. I’m not too sure what the big deal is with China Mobile getting an iPhone as it’s not like the iPhone isn’t already available in China.

Naturally it would be a big deal for Apple with China Mobile having a potential 610 million customers that could well switch to the iOS smartphone, but I figure the real issue here is if Apple does deliver a 4G iPhone to China before it does so in the US, something that personally I can’t see happening anyway, as Apple has as far as I am aware never release an iPhone elsewhere before it is released in the US.

So what do our reader’s think about this China Mobile iPhone prototype image, do you think it is the real deal and Apple will deliver their iPhone to China Mobile in the not too distant future, or do you feel that it is simply a fake image?

Either way apparently there are already 5.6 million iPhone handsets on the China Mobile network, presumably unlocked devices, and sooner or later Apple will no doubt bring the iPhone to China Mobile simply because of the revenue attraction the carrier can offer, agree or disagree? 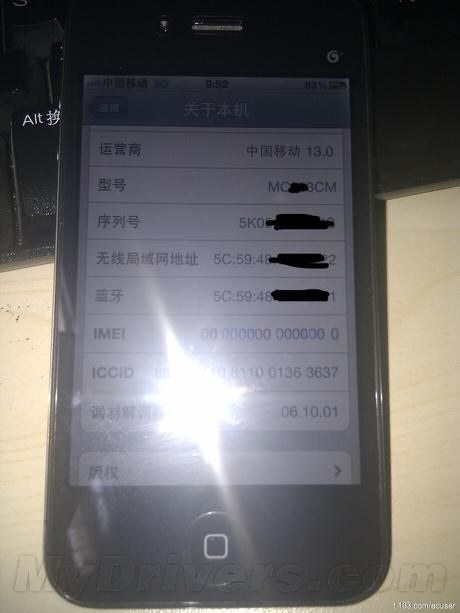