Now when one thinks of the LG Optimus Black naturally you think a black coloured smartphone, but what if LG push out a white version of the Opimus Black, something we already knew was going to happen, and now it has and the LG Optimus White as it is being called is now available for pre-order in the United Kingdom.

According to an article over on Phone Arena, the LG Optimus White is now up for pre-order in the UK with Phones4U, with shipments of the Android smartphone kicking off no later than the 15th of this month, and furthermore you can snap up the LG Optimus White as a free handset on certain contacts.

As far as we are aware the change with the LG Optimus Black is purely cosmetic and the smartphone still offers the same specifications such as a 4-inch IPS LCD capacitive touch screen, 5 megapixel auto-focus camera with LED flash, 2 megapixel front facing camera, 2GB internal memory, microSD expansion up to 32GB, WiFi, Bluetooth, GPS, and of course Android 2.2 Froyo OS.

Of course other than the colour change, the name of the smartphone has changed to the LG Optimus White, which might lead to some confusion and thinking the device is a completely new handset but of course it isn’t. 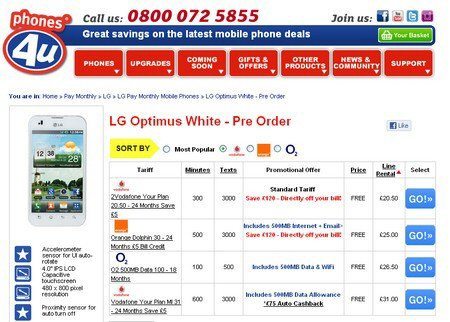