Well the first webOS tablet has finally hit the mobile arena, and thus far reviews of the HP TouchPad have been less than complimentary, so if you are sting on the fence pondering whether to pick up the HP TouchPad, perhaps a lengthy in-depth video review will help you make up your mind one way or the other.

Thus that’s what we have for your viewing consideration below courtesy of Aaron Baker over at Phone Dog, two videos that jointly twenty-four minutes of checking out HP’s webOS slate, but it the tablet the one for you?

The problem with the HP TouchPad is that numerous people have reported issues with freezing, and random reboots, and even Aaron has some of those problems in the video footage, and according to Aaron, random reboots is enough to make customers walk away from the HP TouchPad and go after another tablet such as the Apple iPad 2.

The HP TouchPad is available for $499 for the 16GB WiFi model and $599 for the 32GB model; however, according to the guys over at PreCentral Forums, the HP TouchPad has seen a price reduction on both Amazon and Best Buy.

However with all the issues with the HP TouchPad I’m not sure if that price discount is big enough to attract customers to pick up the webOS slate.

Aaron does say that webOS is one of the best mobile operating systems out there but isn’t optimised for tablets and thus the HP TouchPad is riddled with errors and bugs and as such he can’t recommend the tablet in its current form.

So all you need do now is head on down and mash those play buttons to check out the full HP TouchPad review, but in all honesty from where I’m standing it looks like HP needs to go back to the drawing board with this one…enjoy. 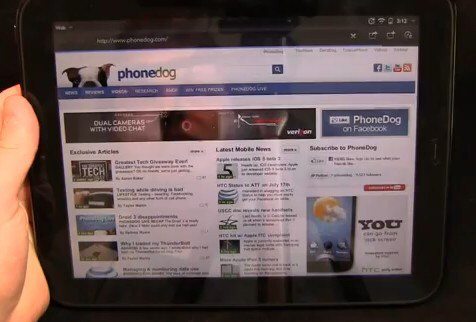