For those over in the good ole US of A that want to get some Facebook integrated action on their smartphone, the new option for accessing your Facebook account is of course the AT&T bound HTC Status, the US version of the HTC ChaCha, so if you are contemplating snapping up the HTC Status when AT&T make it available, we have a hands-on video with the device for your viewing consideration below.

The HTC Status hands-on video comes our way courtesy of the guys over at Engadget, and delivers just over five minutes of checking out the HTC Status with its dedicated Facebook button, which is also AT&T’s first Android 2.3 Gingerbread smartphone.

The HTC Status is a portrait QWERTY handset with a contoured shape with the power button and 3.5mm jack socket on the top of the device while on the left side sits the USB port and volume rocker, leaving the right side and bottom free.

The HTC Status features a 2.6-inch capacitive touch screen above that QWERTY keyboard with 480 x 320 pixels, which the guys say isn’t their favourite mainly due to that resolution making things look a little blurred, and also viewing angles are particularly good. However the touch screen is responsive and so are the Android haptic controls below.

As stated previously the HTC Status runs Android 2.3 Gingerbread with HTC Sense, something the guys say they can’t understand with Sense is on the Status with its really small screen as swiping the ring on the lock screen your finger comes very close to leaving the display, and the fact that HTC Sense widgets kind of overwhelm the display.

The HTC Status is available for pre-order from AT&T with an expected release date of the 17th of this month and commands a reasonable price tag of $49.99 when signing up for the usual two-year agreement and a minimum 15 buck data plan.

So all you really need do now if you are considering picking up the HTC Status is head on down and mash that play button to check out if the smartphone is really the one for you…enjoy. 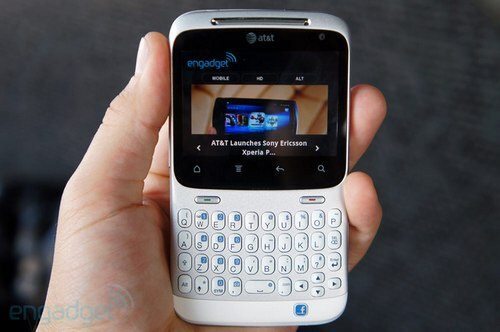