According to the guys over on Android Community, Asus acted quite quickly to let their customers know they wouldn’t be left out when it comes to Android 3.2 Honeycomb by using their Twitter account to announce they hope to release the update soon.

Apparently they are currently testing Android 2.3 Honeycomb for the Asus Eee Pad Transformer, and according to the guys they assure that Asus will be rolling out the update over the air as soon as possible.

Here’s what @Asus tweeted…”@Asus is testing Android 3.2 on the #EeePadTransformer now — we hope to have it released soon!”

Thus is appears that Asus Eee Pad Transformer owners wont have that much longer to wait until they can shift up to Android 3.2 Honeycomb from the 3.1 Honeycomb version they are currently running, so keep your eyes open for the over the air update in the not too distant future.

So there you have it, barring any real problems that may or may not lead to any delays with Android 3.2 Honeycomb for the Asus Eee Pad Transformer, the Android update should be winging its way to your Android slate in all good time, of course that “soon” quoted by Asus could actually mean anytime couldn’t it, so just sit back and be a little patient as it will come sooner or later. 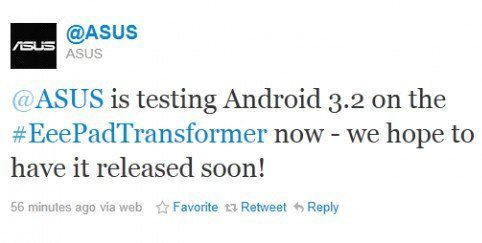