So what does the updated Twitter for Android app bring to the game that’s new? Well the Twitter Blog has announced that the update delivers two commonly user requested features and those features are…

Twitter for Android now does push notifications, a feature that will let the user instantly receive Twitter updates no matter what you happen to be doing with your device. And the second new feature added to twitter for Android is the ability to use multiple accounts.

Apparently Android users can now use multiple accounts without the need to log out and it’s quite easy to switch from one account to another to share and discover what’s going on in the tweeting world.

Once you’ve updated your app by grabbing the latest version from the Android Market, to activate those push notification go to your account settings, select “automatic refresh” and pick to receive updates for @Mentions (from people you follow or anyone), Direct Messages and Tweets.

So there you have it, if you haven’t already grabbed the updated Twitter for Android app you can do so as of right now by going here, something I haven’t done yet myself, I must be slipping, but then to be honest I’m not a great personal tweeter. However if you do grab the updated app and use it feel free to let us now if it all works well or if you have any issues with the new app by posting to our comments area below. 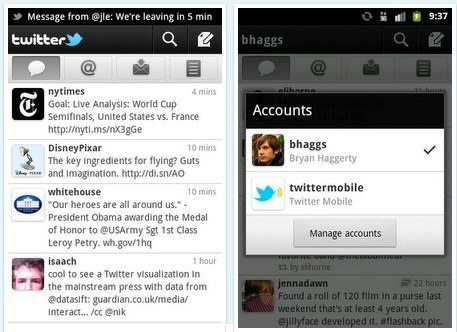 2 thoughts on “Twitter for Android Updates With Two New Features”