Google Maps comes pre-installed on all Android devices, so what is the point of looking at installing any other navigation app. Well, we have an answer to that because Wikitude Drive android app outshines Google Maps directions.

Wikitude Drive is the world’s first augmented reality (AR) navigation system, there is a free trial that you can install right now or if you prefer the full version they retail at Â£8.79 (about $9.99), there are a few cheaper but this price is on most of them.

Before I give you the apps features, you might want to know that there are several apps covering different countries such as: Canada, Mexico, Germany, Austria, Italy, Spain, France, Switzerland and Great Britain.

This app uses your devices camera, which in return shows you the road when you drive down it, the augmented reality cam view works in a way that it overlays additional information such as turn-by-turn directions and other landmarks. 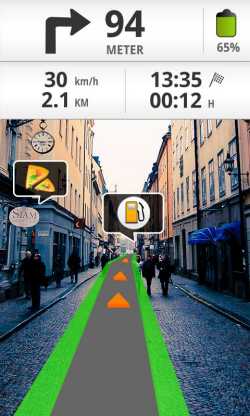 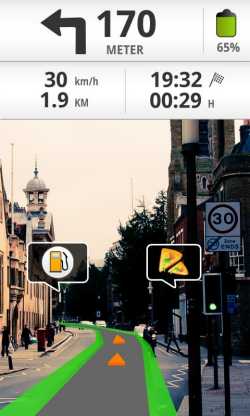 The Wikitude android application is the best “Augmented Reality Browser”; it is a fun and very useful app that uses the camera to its best advantage.

The main features include: Find events, tweets, Wikipedia articles, ATMs, restaurants, user reviews, Experience places near you in augmented reality or show them on a map and list view, Explore and identify places and objects near by, Browse more than 100 million places and interactive content, Find mobile coupons and discounts for stores and shops near you and Search for specific places, for example “Chinese Restaurant” etc.

The app has had an update that now includes support for Tablet supported view (Android 3.x), Android Police has their say about the app, and say that it sounds all great but it does consume battery life when the camera and GPS are running constantly unlike normal sat-navs.

Ok it shows the roads as you are driving through it, which will result in drivers taking their eyes of the real road to look at the AR one on the mobile device. Nether the less it is still a fantastic app and unique to say the least.

Wonder how long it will be before Wikitude gets sued for a traffic accident occurred because of driver negligence? If you already have Wikitude installed on your Android device please let us know what you think of it by sending us your personal reviews.