iPhone and iPad Isnâ€™t The Only Thing China Knocks Off

Now most are aware that over in China there are a great deal of knock off merchants that will clone just about anything they can get their hands on, and a target for the Chinese clones is often Apple gear, namely the iPhone and Apple iPad, but now apparently that isn’t quite enough to knock-off iOS gear and so these rip-off bods have now knocked off the Apple Store.

Apparently a counterfeit Apple Store has now popped up in Kunming, China according to an article over on This Is My Next by way of blogger Birdabroad, who snapped these images and was apparently halted in doing so at first until she persuaded the store’s staff she was an Apple employee, albeit not being so and thus the store staff let her continue.

Thus far Apple has only a small presence in Beijing and Shanghai, but is continuing to expand their presence in China, and makes each Apple store unique, and apparently some of these fake Apple store employees actually believe they are working for Apple.

Apparently each of these counterfeit stores feature wooden display tables products on tilted stands, and wall mounted graphics, classic Apple winding staircase, and even the employees are dressed in blue Apple branded tops with a white lanyard around their neck so complete the illusion the store is the genuine article. 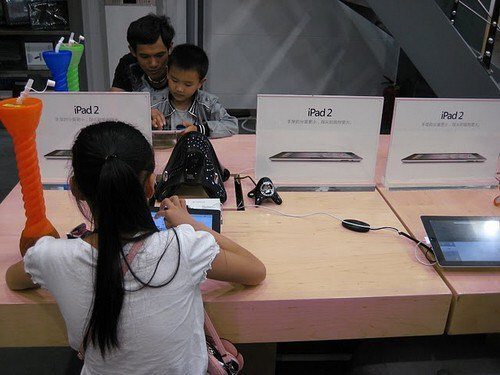 However one telltale giveaway that this Apple store is actually a fake is that Apple doesn’t actually have “Apple Store” worded under the Apple logo on their store signs, rather opting for just the Apple logo itself.

Birdabroad says of the fake Apple store, “this was a total Apple store ripoff. A beautiful ripoff — a brilliant one — the best ripoff store we had ever seen (and we see them every day).”

Furthermore, apparently not just a ten-minute walk away from this knock-off Apple store there are apparently another two counterfeit Apple stores.

Surely in this day and age even if it is China there should be some way of putting a halt to all this copyright infringements by these counterfeit merchants, but I guess even in today’s modern world China is set apart from the rest and untouchable even by Apple lawyers, something that should be address, as in most other countries Apple would have been able to come down on these fakers like a ton of bricks. 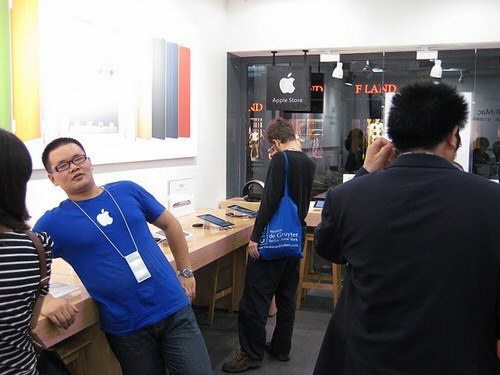