Droid Bionic Accessory Shows Off Back of Handset

For all those that are still patiently awaiting the arrival of the much-delayed Motorola Droid Bionic, there’s a new picture of the Android smartphone hit the net waves thanks to Motorola and Amazon showing off device accessories in advance of the device actually being released, and this latest accessory image shows off the rear of the Motorola Droid Bionic.

The image was spotting by the guys over at Droid-life, and is of the Motorola 89498N HD Station with Rapid Wall charger for the Droid Bionic, and gives us a nice clear gander at the rear side of the handset which shows that the Motorola Droid Bionic will have a hump on the back.

As you are probably aware, the Motorola Droid Bionic has undergone numerous design changes since we first caught sight of the device, and images of the Motorola Targa did show a humped back, and now this latest image confirms that the Droid Bionic will have that contoured rear.

Closer scrutiny of the image also confirms that the Motorola Droid Bionic will indeed come out to play sporting an 8 megapixel camera as previously heard.

Apparently the guys have been getting a few inquiries as to just where the battery door is on the Droid Bionic, to which the guys guess that the Droid Bionic will actually be like the Motorola Droid 3 and have a removable full back cover.

Size wise the Droid Bionic accessory on Amazon measures 8.7 x 6 x 1.5 inches and weighs in at one pound with several USB ports, a 3.5mm headphone jack, and HDMI out port, but you’re not really interested in that are you.

There’s no word on when the accessory will become available but then again that’s to be expected as it would probably give away when the Motorola Droid Bionic would likely come out to play, something that currently hasn’t been confirmed but is rumoured to be the 4th of August.

There’s another rumour doing the rounds that although the Motorola Droid Bionic hasn’t hit the streets yet there is already a successor handset in development, which we reported on the other day and is called the Motorola Dinara.

Anyway that aside, if Droid Bionic accessories are starting to make an appearance then the long, long wait for the Motorola Droid Bionic to finally come out to play can’t be that far off. 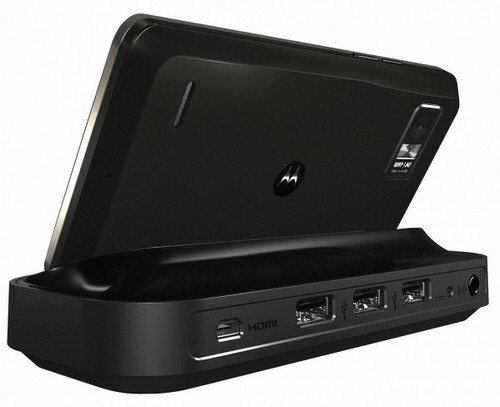