We know our readers do enjoy a good smartphone fight on video, so we have one for your viewing consideration below that pits Android against Android, physical keyboard against physical keyboard, as the Motorola Droid 3 takes on the T-Mobile myTouch 4G Slide in a comparisons battle for your enjoyment.

The Motorola Droid 3 versus the T-Mobile myTouch 4G Slide comparison fight comes our way courtesy of a two-part video confrontation done by Aaron Baker over at Phone Dog and combines delivers almost twenty-eight minutes of comparing the two Android handsets to se if one can best the other.

Both devices are high-end handset on their respective carriers, and both smartphones bring the Android 2.3 Gingerbread operating system into play, but there are a few differences spec wise.

Apparently the Motorola Droid 3 and T-Mobile myTouch 4G Slide are coming out about the same time with the Droid 3 commanding $199.99 on Verizon, and the myTouch 4G Slide costing the same price form T-Mobile, but how do they face up to each other and which device should you opt for?

Well you should know by now that I’m not the one to make that decision for you but rather let you head on down below to mash those play buttons and check out the Motorola Droid 3 against the T-Mobile myTouch 4G Slide so you can make that informed decision for yourself.

Of course once you have viewed the footage feel free to express your opinions on whether you agree with Aaron’s findings by posting your views to our comments area below…enjoy. 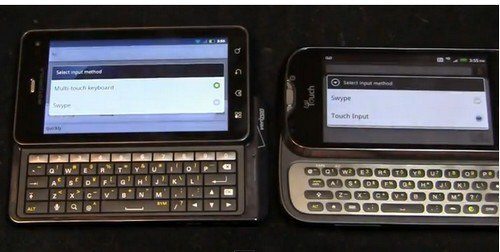