As most of the Apple iPad faithful out there in Apple land, their iOS slate doesn’t actually have an iPad optimised Facebook app available yet, something that has basically made iPad owners use the Facebook for iPhone app as a substitute. However it appears there could be a Facebook for iPad app on the horizon.

According to an article over on The Telegraph, MG Sieger of Tech Crunch says they have found a Facebook iPad app hidden inside the Facebook iPhone app, here’s what Sieger wrote…

“Hidden in the code of Facebook’s iPhone app is the code for something else. Something everyone has been waiting over a year for. The iPad app. Yes, it’s real, and it’s spectacular… And yes, it really is right there within the code…For the past couple hours, I’ve been using Facebook’s iPad app. Well, I should qualify this. I can’t be sure if this is the version they’ll actually ship, but based on everything I’ve seen, I’m going to assume it’s at least very close to the version they’re going to ship.”

Apparently only those iPad users that have jailbroken their device are able to see the Facebook for iPad app, and Sieger played with the iOS application for a few hours and stresses that he can’t be sure that this is the version Facebook will eventually ship.

However he does believe that it is very close to the version that will ship based on what he’s seen, and although much is written in HTML, the “native iPad work is very good too.”

Sieger also says that the navigation system is “great” with the Facebook iPad app using a left side menu system, which can be accessed either via a flick or touch of a button, whilst making good use of pop-overs.

Apparently turning your Apple iPad to the horizontal position delivers a list of online friends that you can chat with on Facebook along with whatever else you do with your friends on Facebook.

Sieger has also done a kindness of posting an abundance of images of the Facebook for iPad app which you can check out Here, and you can gain more information on the Facebook iPad app by hitting up their website.

Thus it would appear that the long, long wait for Apple iPad users to gain an iPad optimised Facebook app for their slate might well be coming to an end, although apparently a spokesperson for Facebook has stated, “We’re constantly working on new products and features but have nothing new to announce at this time.” So just when will Facebook go official with their iPad app is basically anyone’s guess for now. 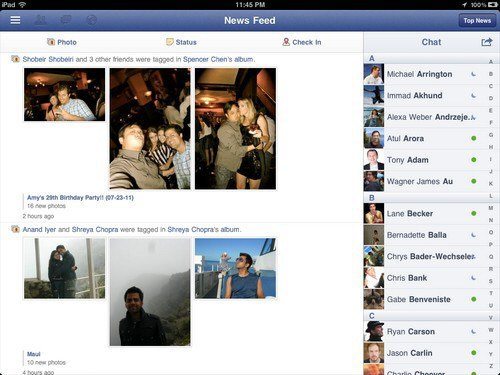