We have a battle of the 4G smartphones for your viewing consideration below, a two-part video confrontation that pits T-Mobile against Verizon as the Samsung Droid Charge takes on the T-Mobile myTouch 4G Slide to see which Android smartphone can come out on top, if any of course.

The T-Mobile myTouch 4G Slide versus the Samsung Droid Charge comparison two-part video comes our way courtesy of Aaron Baker over at Phone Dog and jointly delivers just over 26 minutes of battling footage.

So spec wise there isn’t that much of a difference between these two Android smartphones, but there are pros and cons on both sides.

Of course when it comes to 4G there are debates what is really 4G, with T-Mobile claiming their HSPA+ is 4G while Verizon has 4G LTE and Sprint has WiMAX, but when it comes down to it 4G is 4G to your everyday customer no matter what its called.

The T-Mobile myTouch 4G Slide is available from T-Mobile of course for $199.99 on a 2-year term and after a mail in rebate and plays nice on HSPA+, while the Samsung Droid Charge costs $299.99 on Verizon and plays nice on Verizon’s 4G LTE network, and according to Aaron is arguably Verizon’s flagship 4G LTE smartphone.

So out of these two Android 4G enabled beasts of a smartphone, which handset is for you, will the T-Mobile myTouch 4G Slide best the Samsung Droid Charge and come out the overall winner or visa versa?

Well like always that’s not up to me to say, so you’ll need to head on down to mash those play buttons to check out the Droid Charge, myTouch 4G Slide comparison battle to find the answer, but will you agree with Aaron’s findings…enjoy. 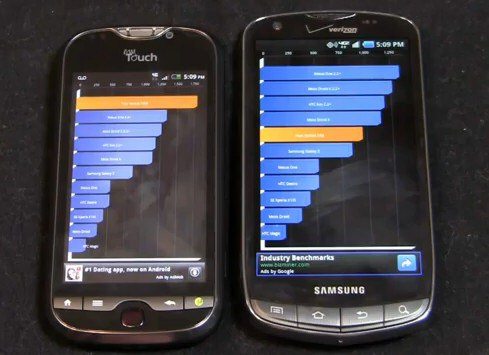