Furthermore potential customers can now pre-order the BlackBerry Bold 9900 from Phones 4u, which will be available on both Vodafone and Orange networks.

According to Phones 4u, “The stunning high-performance BlackBerry Bold 9900 combines BlackBerry’s industry leading QWERTY keyboard design with a brilliant, high resolution touch screen. The exceptional smartphone is powered by the BlackBerry 7 OS now with Liquid Graphics, enhanced BlackBerryÂ® Browser, voice-activated Universal Search, support for augmented reality and NFC, as well as additional premium personal and productivity apps out of the box.”

The retailer also says, “Distinguished by an iconic design and the industry’s best keyboard, the BlackBerry Bold 9900 smartphone features premium materials and finishes that characterise the BlackBerry Bold line. It has a lustrous exterior with a brushed stainless steel frame and a high-gloss glass-weave backplate.”

So there you have it, if you have been waiting to snap up the BlackBerry Bold 9900 with Phones 4u, you can get your pre-order in, or just wait until the 18th of August rolls around and go get the handset.

Any of our BlackBerry faithful readers out there in the UK hoping to pick up the BlackBerry Bold 9900, or are you waiting for the BlackBerry Torch 9810 to make an appearance? Fell free to let us know by dropping us a line to our comments area below. 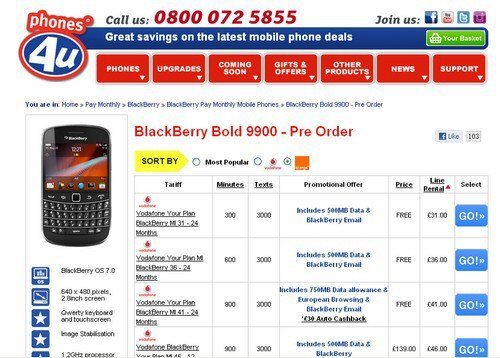