Now of course if you are going to opt for some other tablet than the Apple iPad 2 you’ll no doubt want a slate that you can boast is a designer tablet, and now if you are in the UK it appears you can do just that as fashion designer Pierre Cardin has come up with what that tout as “the UK’s first designer tablet.”

According to an article over on Trusted Reviews, the French fashion house now offers a 7-inch Android slate that has apparently been created by Pierre Cardin for “brand-conscious technology users.”

Now the big let down with the Pierre Cardin tablet, the device is running Android 2.2 Froyo rather than the tablet specific Android 3.0x Honeycomb, which kind of puts it in the HTC Flyer area of devices.

The Pierre Cardin Android tablet does apparently support both WiFi and 3G however that 3G connectivity does require the addition of a 3G dongle so not really built-in then.

According to the slates buy now page blurb, “The Pierre Cardin Tablet PC is perfectly sized to fit in the palm of your hand yet practical enough for life on the go. Powered by the ever-popular Android operating system and packed with a fantastic array of features, the communication and entertainment possibilities are endless.”

Size wise the Pierre Cardin tablet measures 195 x 123 x 14mm and weighs in at 520 grams and you do receive a Pierre Cardin protective case with logo so you can show off to your friends and also as they say “all packed in an uber-cool black gift box.”

So what will the Android 2.2 Froyo Pierre Cardin PC-7006 tablet set you back? It can be yours along with designer bragging rights for a total of Â£275.00 with free shipping from the Pierre Cardin website.

Unfortunately though there is no mention as to whether Pierre Cardin will updated the device to Android Honeycomb at some future point, which tend to make me think that perhaps this little Android slate won’t do too well, still you never know. 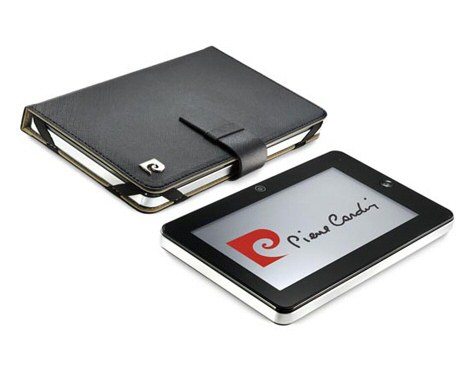 One thought on “Pierre Cardin Goes Android With Designer Tablet”