Although there are no hard and fast confirmed specs for Apple’s next generation iPhone, it appears that at least one case maker has made the premature jump into offering iPhone 5 cases for sale even though the iPhone 5 has yet to be officially announced, which is expected sometime next month if the rumours turn out to be correct.

According to an article over on MacRumors, online retailer, True Supplier is now offering numerous hard shell cases for the iPhone 5, along with soft cases for the next generation iOS smartphone.

Apparently these iPhone 5 hard shell cases feature the tapered back design along with the mute switch being moved to the opposite side and apparently follows a leaked design document, which basically means some case makers are quite confident that the leaked case design will be the real deal.

Of course they could be wrong in their assumption and have several useless iPhone 5 cases in their inventory, as Apple hasn’t given any information on the design of the iPhone 5 as far as I am aware, but the case makers could have gained some internal info from iPhone 5 manufacturers I guess.

Price wise, if you are tempted to take the chance that the case maker is correct in their assumption, the iPhone 5 hard shell cases command an asking price of $6.99.

This leads me to wonder that if these supposed iPhone 5 cases fail to fit the iPhone 5 the company can possibly claim they are for the iPhone 4 if anyone decides to returned them as stated on the “see details” page.

So personally my advice is perhaps to forego purchasing your iPhone 5 case until such times as Apple release the device and you have it in your hands, otherwise you may find you have a case that isn’t any good. 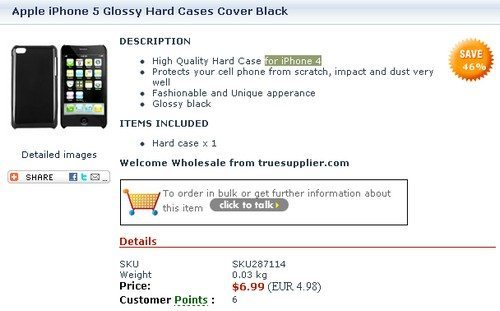