Nokia C3-01 Comes Out To Play In Gold

For the Nokia faithful out there that would like a little touch of class to their S40 series handset, Nokia has now made available the Nokia C3-01 Gold Edition, which has apparently been designed exclusively for Eastern Europe and Middle Eastern markets and will be coated in 18-carat gold plate.

According to the guys over at Nokia Conversations, other than that 18-carat gold plating the Nokia C3-01 Gold Edition also sports a “ceramic-feel keymat” along with am matching theme.

Apparently spec wise the Nokia C3-01 Gold Edition gets a processor bump up to 1GHz and features a 2.4-inch QVGA touch screen along with a 5 megapixel rear facing camera with LED flash, quad-band radio up to HSDPA speeds, Bluetooth, WiFi, and microSD expansion up to 32GB.

The Nokia C3-01 Gold Edition measures 111 x 47 x 11mm and weighs in at 100 grams, with a battery that offers up to 5.5 hours talk time and up to 18 days standby time. The Nokia smartphone also offers Nokia Messaging for both IM and email and the ability to check into both Twitter and Facebook.

For those that might be interested in picking up the shiny Nokia C3-01 Gold Edition apparently Nokia has now started shipping the smartphone to select market with a view to extending to more markets over the coming week.

As for what the Nokia C3-01Gold Edition will hit your pocket for, well, as it is a 18-carat gold plated smartphone that you can show off to your friends that handset will command a price tag of â‚¬220 without subsidies or local tax.

Have to say owning a smartphone in gold does look attractive, but slapping a touch of gold plate on a handset doesn’t mean the device is any better than other smartphones especially when you look at Android high end devices such as the Samsung Galaxy S II and of course the upcoming iPhone 5. 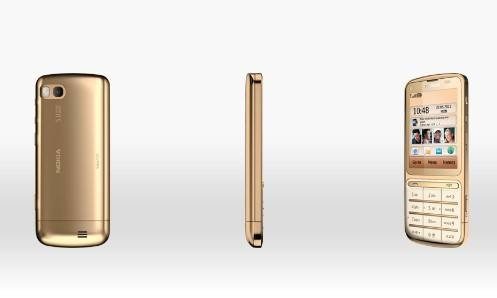