It seems that the favoured colour with smartphones these days other than the standard black is a white version of a device. White appears to be a very popular choice with customers and as such the HTC EVO 3D smartphone will soon be getting a pale shade jacket for those that adore white.

According to an article over on Engadget, those that would prefer their HTC EVO 3D in white will soon be able to get it although only by hitting up RadiShack as @RadioShack recently tweeted the white HTC EVO 3D will become available to them exclusively.

Here’s what @RadioShack tweeted…”Announcing the rare and beautiful
@HTC#WhiteEVO3D from @Sprint, exclusively at RadioShack on 9/9 http://instagr.am/p/LFI-Z/.”

Which obviously means that those that would love to own the Android handset sporting a nice white coat they can do so as of the 9th of September on Sprint at RadioShack.

Obviously the colour of the smartphone wont change any of the specs but when it comes to price well the white HTC EVO 3D may cost you a little extra although currently there is no word on the price RadioShack will be asking.

Personally as I have said before in numerous posts, I do prefer a white handset over a black, as I am sure many do, and it is fairly evident that white models seem to do well in the mobile space, remember all the fuss over the white iPhone 4?

Anyway, there you have it a shiny white EVO 3D is on its way, will you be rushing over to RadioShack to snap it up on the 9th of next month or doesn’t the colour of a device make any difference to you when choosing a handset? 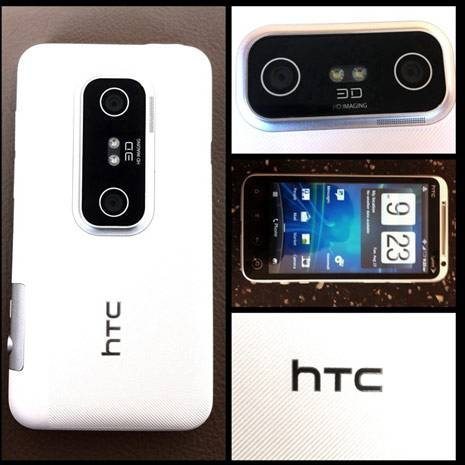