Update: The DroidBionic Twitter account is a fake, it does not belong to Verizon or Motorola, read more about this via PC Mag

There has been a lot of speculation as of when the Verizon Motorola Droid Bionic would be official released, well today we are happy to announce that this smartphone has had it official release date.

This so called OFFICIAL DROID Bionic page on Twitter, is showing the official release date or is it official? The question we have for you is “Will you bother with the Motorola Droid Bionic, or will you wait for the Google Nexus Prime?” this is a valid question and we would love to read your comments below.

The reason we say above “Or is it?” is down to the fact that DroidBionic on Twitter has made many spelling mistake in its time, personally we always go with official announcements of release dates via the big boys such as Motorola or Verizon. 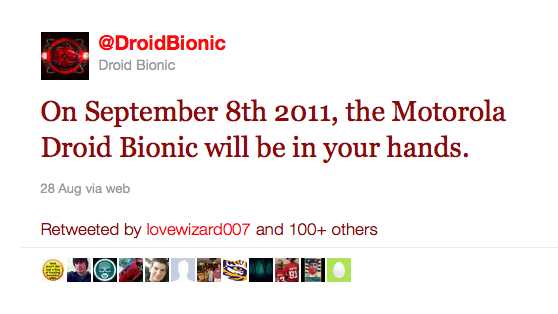 Another reason we ask if this is real or not is down another sighting, we visit the Motorola page yesterday who showed the Droid Bionic, so we looked into this a little more and even Engadget lists the same, who show a screenshot for proof, if you visit the Motorola website now you will see a 404 error.

If you visit Verizon Wireless you will see on its dedicated Droid Bionic page saying “September”, but no exact date is showing. Please let us know if you think that September 8th is the official Motorola Droid Bionic release date. You may like to watch the Droid Bionic teaser video.

3 thoughts on “Verizon Motorola Droid Bionic Official Release Date, or is it: Update”