The Motorola Droid Bionic has finally after much delay seen the light of day in the public space, and although only being available for roughly a week, the Android smartphone has been given the traditional teardown treatment having its internals exposed to find out what the Motorola device is actually made of and how easy it is to repair.

According to the guys over at Phone Arena the guys a teardown site iFixit have now got hold of the Verizon 4G LTE smartphone and ripped it apart apparently with considerable ease.

The word is removing the back cover to gain access to the battery is a breeze and is removable and thus replaceable, while SIM card and microSD slots could be accessed without external tools, while there are 11 screws, a sticker, and some clips are all that keeps anyone out of the Motorola Droid Bionic.

The iFixit guys say that although neither Motorola or Verizon clarified the pixel count on the front facing camera of the Droid Bionic, the handsets VGA quality suggest a 0.3 megapixel camera.

However it appears that one does need to fully disassemble the Droid Bionic to change the LCD or font panel, but apparently many of the smartphones components can be replaced individually as they are not located on big ribbon cables.

Overall the Android 2.3.4 Gingerbread Droid Bionic scores an impressive nine out of ten in reparability stakes, with ten being the easies of all of course, so any would be geek attempting to have a go at repairing the device themselves shouldn’t find it too difficult.

Of course if you do for some reason wish to disassemble your beloved Motorola Droid Bionic you can hit up the iFixit website where you will find all the instructions to do so over sixteen steps and the only tool requires apparently is a single screwdriver. 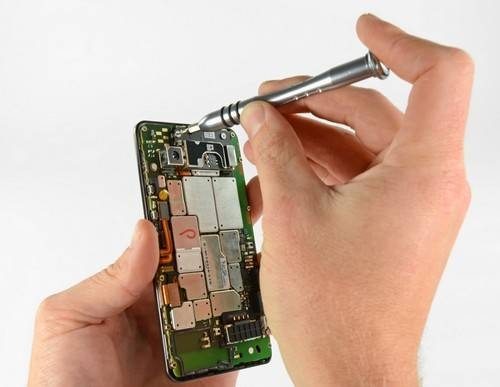