HTC Runnymede Getting Name Change to Bass for UK

Apparently the word is that when the latest Android smartphone out of the HTC camp, a device known as the HTC Runnymede, comes to the UK the handset will apparently receive a name change for some reason or another to the HTC Bass, personally I prefer Runnymede but there you go.

According to an article over on Unwired View, the guys over at UK retailer Handtec claim that the Android 2.3.4 Gingerbread smartphone will come out to play as the HTC Bass and forsake its Runnymede moniker.

The UK retailer has also put up a product page for the HTC Bass, however the pricing for the Android handset remains at Â£0.00 due to them not knowing what the device will command price wise although they will offer the HTC Bass in white, unlocked and SIM free.

Obviously HTC hasn’t yet made an official announcement just when the HTC Runnymede/Bass will come out to play, but according to the article HTC will announce the handset sometime early next month.

For those that might have missed what the HTC Runnymede or HTC Bass if you wish has to offer, the device is said to pack a 4.7-inch qHD touch screen, an 8 megapixel camera with dual flash, 720p video, a 1.3 megapixel front facing camera for your video calls, a 1.5GHz single core MSM8255, 758MB RAM and 16GB storage, latest HTC user interface, HTC Sense 3.5, feature DNLA connectivity, and a pair of Beats headphones, and Android 2.3.4 Gingerbread.

So what do our readers thing about this supposed name change, do you prefer the HTC Runnymede or the HTC Bass, feel free to let us know by posting to our comments area below. 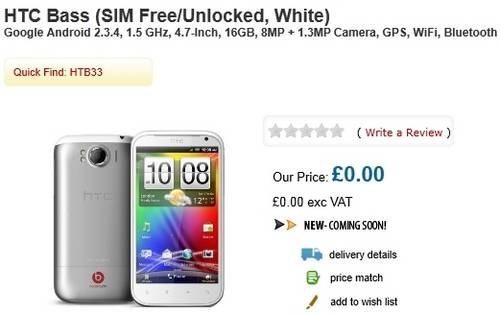