As you may know, the other day Martin Fichter, the acting president of HTC America made a remark that based on talking to a few kids, that the iPhone has now lost its coolness factor amongst the younger generation due to their parents using the iconic iOS smartphone, and of course when one opens their mouth on unsubstantiated facts there obviously will be some comeback.

According to an article over on iDownload Blog the guys over at Joy of Tech have now come up with a humorous comic that pokes a little fun at Fichter and his uncool iPhone remark as payback for claiming in a public forum the iPhone is not as cool as it once was.

In the comic, which you can view below Fichter makes his claim that the iPhone just isn’t cool anymore, and the iPhone then jumps a shark and is again one of the coolest handsets around.

Thus it goes to show that unless you can substantiate your claims you can expect some kind of comeback from someone, especially when it concerns the iPhone, although even though probably most of the iOS faithful didn’t like the comment I figure Fichter does have a right to his opinion.

The big question here is could Fichter be right in his assumption, as with most tech stuff in life at some point it does lose its coolness factor, and especially when your parents are using it, so perhaps one shouldn’t be that hard on Fichter as no doubt there are many out there that would also say the iPhone isn’t the coolest device around, just ask any of the Android faithful.

So here’s a question for our readers, do you agree with Martin Fichter that the iPhone is uncool, or do you disagree and believe the iPhone will always be a cool device in the eyes of the younger generation? 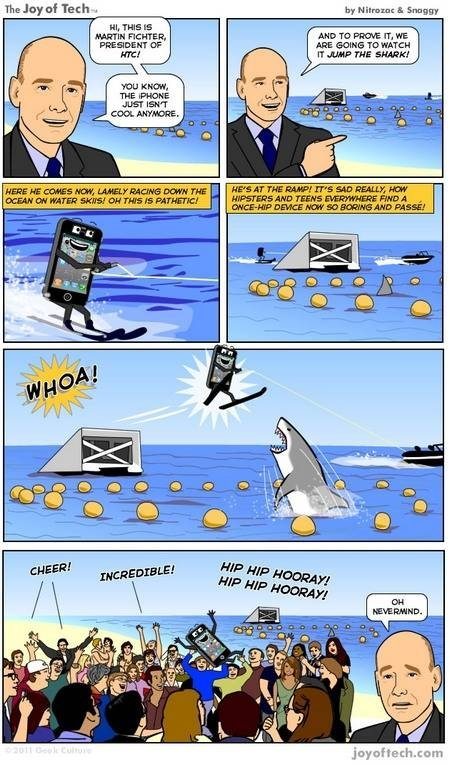 2 thoughts on “iPhone Uncool HTC Remark Slapped Down By Comic”