The Samsung Galaxy S Wireless Inductive Charging Mod video comes our way courtesy of the guys over at Engadget and by way of Quanqin.de, and shows the Android smartphone playing nice with the webOS inductive charging dock.

Apparently this guy wanted inductive charging on the device without voiding its warranty, and so purchased a Palm Pre back cover along with the Touchstone, pulled the charging unit out of the cover and placed it into the back cover of the Samsung Galaxy S Plus and then ran a wire from the unit to the handset’s microUSB slot.

The footage below shows the Samsung Galaxy S Plus in action with the Touchstone dock, and if the mod is done correctly the back cover will still fit perfectly on the device.

The guys says, “I wanted the best of both worlds, so my mod had to be invisible on first view and don’t void the warranty of my all new phone. (As the Galaxy S is built identically as the Galaxy S Plus, this mod should work flawlessly with the Galaxy S too.)”

So head on down and mash that play button to check out just how this mod looks on the Samsung Galaxy S Plus, and if you happen to own a Samsung Galaxy S and wish to try the mod out yourself the full instructions for doing so are on the Quanqin website, and feel free to let us know how you get on…enjoy. 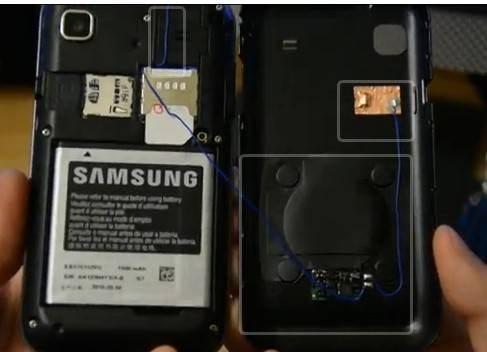