If you are pondering whether to pick up the Asus Eee Pad Slider as your favoured Android Honeycomb tablet but still aren’t quite sure, perhaps a unboxing video of the brother of the Asus Eeep Pad Transformer might sway your decision one way or the other, and so that’s what we have for your viewing pleasure below.

The unboxing of the Android 3.2 Honeycomb slate comes our way courtesy of Jon Rettinger over at Technobuffalo and delivers eight minutes of unwrapping the Asus Eee Pad Slider, the tablet that has its keyboard permanently attached.

According to Jon’s initial impressions the Asus Eee Pad Slider isn’t “too shabby” with the keyboard being “roomy and responsive in first try,” and although the slider mech took a second to figure out it wasn’t too bad.

The Eee Pad Slider incorporates a single hinge for that sliding action and seems to work rather well with a nice snap sound as it clicks into place, as you will see in the video below, and Jon says he’ll be posting a full review of the Android slate in very soon.

Price wise, Phones Review’s Mark posted an article delivering the price of the Asus Eee Pad Slider available from Newegg, which you can check out by hitting up (here).

So is the Asus Eee Pad Slider the tablet you should go for or should you grab its sibling the Asus Eee Pad Transformer as you tablet of choice? Well, head on down and mash that play button to check out this unboxing to see if it’s the tablet for you…enjoy. 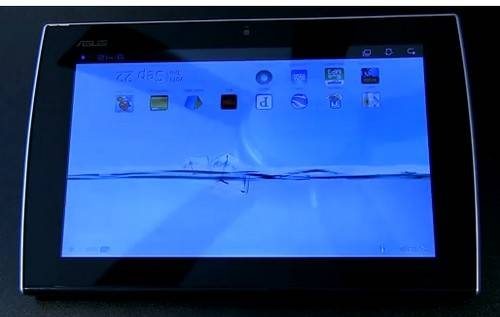