The old Android Honeycomb Motorola Xoom slate has been around for a while now, and we know there will be a successor to the Xoom, a device that will of course be known as the Motorola Xoom 2, but apparently the Motorola Xoom 2 will come in two sizes, an 8-inch and 10-inch model and those have just posed for a couple of pictures.

The images and info on both Motorola Xoom 2 slates come our way courtesy of the guys over at Android Community by way of Engadget who got them from an unnamed tipster that confirmed both slates would be 4G LTE enabled.

Apparently both the 8-inch and 10-inch Motorola Xoom 2 will be roughly 9.3mm in thickness, which is about the same thickness as the iPhone 4, and word is both slates have the same codename “Fleming.” Word is they may come out with Android 3.2 Honeycomb OS but then again if Android Ice Cream Sandwich is available by their release they may surface with that.

It’s unclear whether Motorola will push out both sizes, but why produce them if not to get out to the public. However apparently word has it the operating systems on these are still somewhat on the buggy side with frequent crashes and reboots.

Other than that there isn’t a great deal more information on these two other than we learn from the pictures that they will both sport a 5 megapixel rear camera along with a 2 megapixel front facing camera.

Obviously at this stage of the game there’s no clue as to when these Android tablets will be ready to come out and play, but naturally as soon as we hear more we will of course pass it along, until then enjoy the images.

Any of our Android faithful readers hoping to pick up a new Motorola Xoom 2 slate once these hit the mobile space? 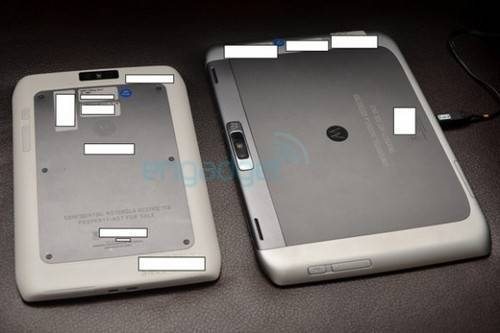