Phones Review Quickie: Despite claims that smaller size tablets than the Apple iPad would never take off, it appears that tablet makers aren’t of the same opinion as we have already seen some smaller slate hit the mobile space, and now another has been revealed in the form of the Toshiba Thrive 7 inch tablet.

Obviously a smaller version of the 10-inch Toshiba Thrive, the guys over at Slash Gear say this new Toshiba Thrive 7 inch sports a display Toshiba called AutoBrite, standing for “Adaptive Display and Resolution+ tech for better graphics and outdoor visibility.”

As for the design of the Toshiba Thrive 7 inch tablet they have stuck with virtually the same design as the original 10-inch version, with an easy grip rubberised back, with a thickness of 0.47 inches and weighs in at 0.88 pounds.

As for when the Toshiba Thrive 7 inch will become available, apparently November is the month, but according to the guys they have also heard the Android slate could appear early December, of course at this early stage in the game Toshiba hasn’t revealed just how much the new 7-inch tablet will hit your pocket for, but as soon as we hear more we’ll let you know. 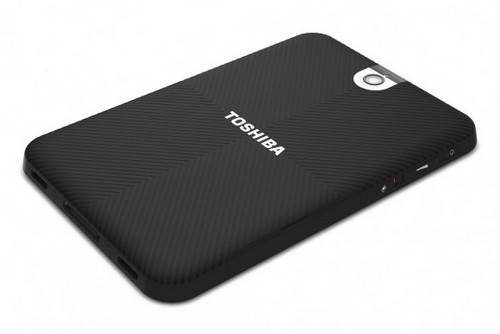