Some might be a little disappointed that the iPhone 5 was not announced at the Apple event today, but at least the iPhone 4S was disapprovingly confirmed with its features within.

The Apple iPhone 4S main features include dual-core A5 CPU, the graphics performance has been boosted by an impressive 7x, it still has the same Retina Display as the iPhone 4 and has dual-core GPU.

The rim around the edge of the iPhone 4S has had a little revamp, let me rephrase that, it is the antenna around the sides that has had a revamp. They can now switch between two different antenna sets, which helps so that users do not get dropped calls, we all remember when we held the iPhone 4 a certain way there were calling problems.

The antennas are now connected to dual-mode CDMA and GSM radio, giving users either 14.4Mbps HSPA+ or EVDO.

The iPhone 4 and iPhone 4S look exactly the same, such a shame and got to admit very much disappointed as was really looking forward to the iPhone 5. 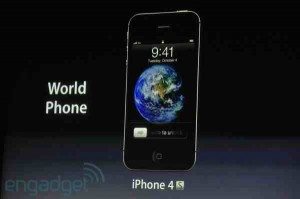