It appears tat a raid took place this morning at the Apple Store in Covent Garden London UK, a daring robbery carried out by seven thieves riding mopeds with pillion passenger and snatched Apple iPads and other Apple devices.

According to an article over on 9to5 Mac, by way of The Next Web, apparently two of the moped riding crooks has already been arrested; all the thieves were wearing full-face crash helmets.

Shoesmith noted, “It’s around 1.15am and the Apple Store in Covent Garden has just been raided! Woke up to hear a load of motorbikes zoom in and then a smash and grab.”

ShoeSmith also remarked “it looks like a lot of Mac computers have been stolen with 4 motor bikes. Police are everywhere now!”

Apparently the Covent Garden store has Mac laptops at the front of the store keeping such devices as the Apple iPad and iPhone further back in the store to hopefully reduce the amount a thief can get away with during a robbery.

The Police have issues a statement on the matter…” Detectives are appealing for witnesses and information after a smash-and-grab in central London.

Police were alerted at approx. 01.00hrs this morning (Monday 10 October) to a window broken and property taken from the Apple Store in Covent Garden.

It is believed there were around 7 moped riders / motorcyclists involved, most if not all with a pillion passenger. All persons were in full face crash helmets.

They stole iPads and other similar devices.

Shortly afterwards Islington police saw a moped and followed and attempted to stop it, but it was lost.

A moped was subsequently found abandoned in the vicinity of Wyclif Court, St John Street EC1 — officers saw two men inside the block of flats, and they were pursued on foot and apprehended within the block at approx 01.20hrs.

Some property, believed stolen from the store, was found in bags in their possession.
The men [A – 16 ys; B – 21 ys] are now in custody at a north London police station.”

Westminster CID Detective Sergeant Nathan Tozer says, “Although two men are in custody on suspicion of burglary, the inquiry continues and other persons are sought. It is essential that anyone who saw the smash-and-grab, or the suspects making off, contact us as soon as possible.”

So if you are in the UK and happen to get offered an Apple iPad or Mac computer on the cheap in the next few weeks it’s likely they are part of the Covent Garden haul so best pass them by or otherwise face a receiving stolen goods charge. 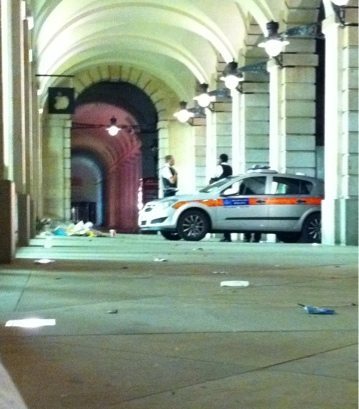