Google Translate for Android Gets Updated with Conversation Mode: Video

Phones Review Quickie: The iPhone 4S is coming with Siri voice assistant, and not to be outdone, Android is getting a new function in the Google Translate app for Android called Conversation Mode that enables the user to translate speech in 14 differing languages, and we have a demo video of Google Translate with Conversion Mode for your viewing consideration below.

The Google Translate for Android with Conversation Mode footage comes our way courtesy of the guys over at Engadget and by way of the official Google Mobile YouTube page, to give you an idea of how the updated Android app now works.

The updated version now adds an additional twelve languages, and to avoid any embarrassing mistakes the user can now edit the translation before sending, the app will translate what the user has said and then speak it back to you.

Okay, so it’s not exactly Siri, but might be a good tool for those Android faithful that do a lot of travelling aboard and need a translation tool to help them get around, and of course with Android Ice Cream Sandwich soon to make an appearance Android just might get a little Siri type action of its own, we’ll just have to wait and see.

For those that would like the updated Google Translate app for Android you can of course grab the app for free from the Android Market, and don’t forget to head on down and hit that play button to check out the video…enjoy. 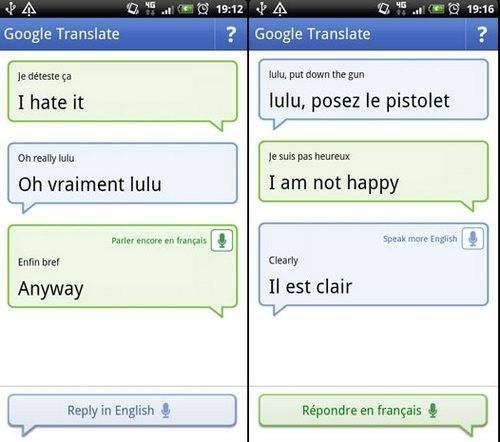