The name Samsung Nexus Prime is what all believes is coming next to Verizon, well the latest news sort of confirms that the Prime Android phone will actually be the Samsung Galaxy Nexus (Verizon) with 4G.

Thanks to Droid-Life they have a screenshot (See below this article) of the “Verizon Device Management”, and in there you can see that the name of the new Android phone hopefully releasing with Ice Cream Sandwich OS is called the Samsung Galaxy Nexus.

Some have said that the new Nexus phone will not be releasing, but it is now safe to say those rumours have been squashed thanks to the new leak.

This confirms that the Samsung Galaxy Nexus will be available for Verizon featuring 4G LTE, but if you look at the screenshot below you will notice there is an “N” under the global phone name, so if you was expecting this to be a world phone you may be a little disappointed.

The Samsung event was postponed last week, and a new date has been set, please come back a little later as we have some news on this.

So the Galaxy Nexus will come with 4G LTE, it also says that it will have voice activation and Bluetooth. All we need now is an FCC filing and it is good to go, please do let us know if you prefer the name Samsung Nexus Galaxy or Samsung Nexus Prime?

As soon as we know more about this Android smartphone, you can mark our words that we will let you know. One way to always get the latest updates is by joining Phones Review on Facebook and Twitter, you can also connect with me Mark Chubb at Google+ 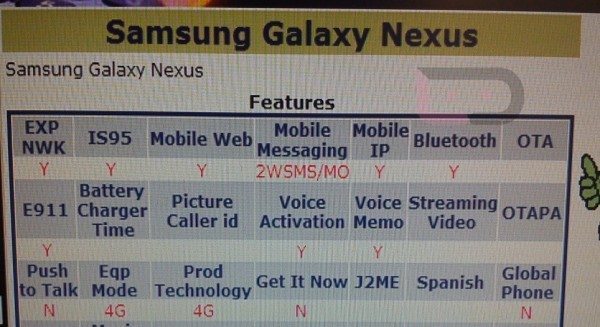