It’s not that long since the iOS masses got their hands on the iPhone 4S and it appears that already there are reports that the latest smartphone from Apple may have a problem with its display with numerous users hitting up Apple’s support forums complaining of a yellowish hue.

According to the guys over at Ubergizmo, by way of TG Daily, this yellow tint problem has been seen previously, back when the iPhone 4 was launched and users complained of the same problem then, a problem that was due to the rapid shipping of the smartphone resulting in not allowing the glue enough time to set.

Users are complaining of washed out colours on the iPhone 4S when compared to the iPhone 4, with one poster saying….” Yea Im not actually sure its the old ‘glue drying’ thing. A number of reviews I have just hunted through of the 4S have mentioned a ‘washed out’ screen, so I’m beginning to worry it’s not a glue drying problem.”

Another posts…” This is NOT normal. I recieved two iPhone 4S’s, one white and one black. The black 4S has a VERY yellow tint to the screen- unlike any iPhone I have ever had, the white 4S has a very WHITE and normal screen.”

While another writes… “I noticed this pretty much straight away on my black iPhone 4S, compared to my iPhone 4 the screen looks washed out and yellow. This problem is definitely not on ALL iPhone 4S’s because I put my sister-in-law’s white 4S side by side with mine and it looked much nicer like my iPhone 4.”

Forum user Chr0m even posted a couple of comparison images to Dropbox, one of which you can check out below that shows the difference in colour from an angle, which makes it stand out even more.

I figure the big thing here is will this yellow tint vanish over time like it did with the iPhone 4, only time will tell, but there are a few iPhone 4S owners out there that aren’t too happy with the situation. So how’s your iPhone 4S screen holding up, have you noticed this yellowish hue yet? 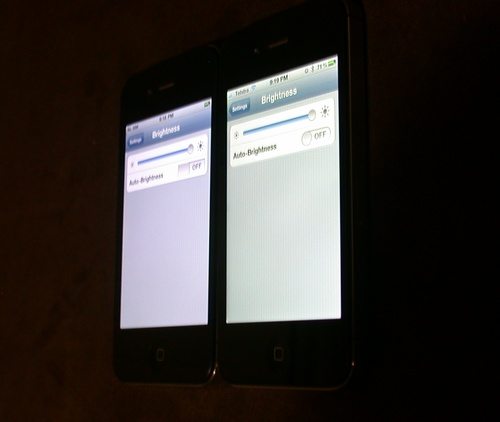