As most of the iOS faithful would tell you, Apple gear is all about security when it comes to such devices as the iPhone and Apple iPad, but with the arrival of the new iPhone 4S it appears Apple may have not been so security conscious, particularly when it come to the iPhone 4S’s biggest attraction the new Siri virtual voice assistant feature, as word has it Siri may be somewhat insecure eve when your iPhone 4S is passcode locked.

According to an article over on Slash Gear by way of Sophos, Siri’s settings right out of the box, enable it to be triggered via the lock screen and thus bypass the PIN-entry, which means anyone with physical access to your iPhone 4S will be able to access and shoot off SMS messages, access the calendar or send emails and just about anything else Siri can do.

The Sophos guys say, “I borrowed a passcode-locked iPhone 4S from a colleague here at Sophos and, with his permission, was able to write an email, and send a text message. If I had wanted to I could have meddled with his calendar appointments too. All without having to enter the passcode. I’m sure you can imagine some of the ways this could potentially be abused.”

However there is apparently a way round this with users being able to disable Siri when their iPhone 4S is locked…enter “Settings/General/Passcode Lock,” and make sure the “Siri” option is set to “Off.”

Doing the above will mean that the Siri voice activated assistant cannot be uses when your iPhone 4S is locked with a passcode.

The Sophos guys say that what is disappointing is that Apple had a clear choice and opted to default to a mode that is more about impressing than securing calendar and email when they could have opted to implement Siri securely. 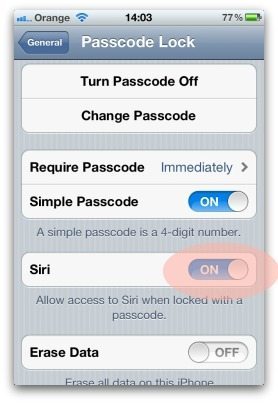