Lets face it some people see their smartphone just as a communications tool for keeping in contact while other simply fall in love with their chosen device and just can’t do without it no matter where they go, their device essentially becomes part of them and in the case of Brit, Trevor Prideaux, his Nokia C7 has literally become part of him.

According to an article over on Ubergizmo by way of The Telegraph, 50-year old Trevor Prideaux was born without his left arm and had to either place his smartphone onto a flat surface or balance it on his prosthetic arm to operate it.

However nowadays Mr. Prideaux doesn’t have that problem as he has built a dock for his Nokia C7 handset right into his prosthetic arm, and although the dock won’t allow charging, hooking up to a PC and the like, at least Trevor can now operate his handset with ease.

Apparently Mr. Prideaux, a catering manager sought the help of Nokia communications chiefs along with medical experts to construct the prosthetic dock for his Nokia handset, and Trevor says, “I think this is the first time this has ever been done in the world – and it is brilliant.”

Trevor adds, “The phone slots smoothly and securely within my limb and is easily removable, when required. I think this would help a lot of people with prosthetic arms – especially those who were not born with the disability. People who have had motorbike crashes and soldiers who have lost limbs – they could all benefit from this.”

Apparently originally Trevor contacted Apple to get a blank iPhone casing so he could test it out, but unfortunately Apple declined to cooperate. However when Trevor upgraded his Nokia handset at O2 he decided to ask Nokia and they agreed to help.

Have to say well done Nokia for helping, shame Apple refused. This idea seems quite a useful ideal to me and would benefit many who have prosthetic arms and struggle with today’s touch screen smartphones. 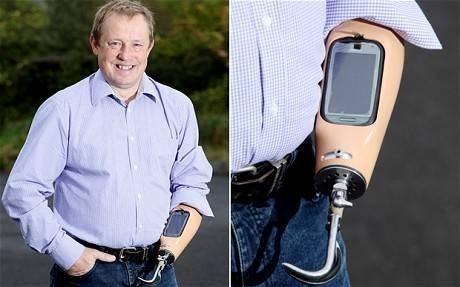