The Samsung Galaxy Nexus needs a quick review, and put together in categories that include design and hardware, plus camera and software. This is the latest Android 4.0 Ice Cream Sandwich phone, so let’s see what it has to offer.

So rumours have circulated that the new Samsung Galaxy Nexus is quite a chunky smartphone, which is almost as large as the HTC Sensation XL. Although what you may have heard is somewhat true the Galaxy Nexus is actually 7mm at its thinnest point; if your unfamiliar with millimeters but have held an iPhone 4S at some point in your life then we can reassure you by saying the iPhone 4S is 9.3mm at its thinnest point and that is pretty slim for a smartphone with all the features that it contains.

Back to the Galaxy Nexus, The screen is the obvious touch screen with a Super AMOLED HD display and crisp resolution of 1280 x 720, The size of the screen is a very impressive 4.65 inches which is a great factor when considering that the new android ice cream sandwich has a face recognition unlocking system but we will move on to that shortly.

The curved mobile phone has opted for the rounded edges found previously in the nexus range, The new Nexus mobile phone is a complete touchscreen phone and you wont find any buttons on the mobile. 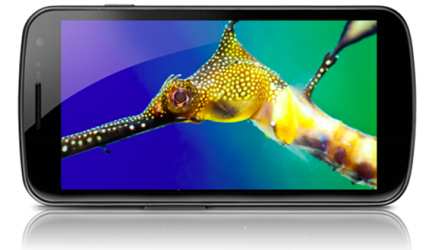 The Samsung Galaxy Nexus sports 2 cameras, the main camera is 5-megapixel and Samsung have integrated a front-facing camera for video calling which is perfect for using the Skype app found in the Android marketplace. Overall the Galaxy Nexus compared to the iPhone 4S is actually lighter; where the iPhone 4S weighs 140g, The Galaxy Nexus is 135g so 5g lighter than the popular iPhone 4S.

The Samsung Galaxy Nexus will be the first mobile phone on the market to run on the brand new android ice cream sandwich software. The new functions available on the new operating software are very innovative such as voice typing; Talk to your Galaxy Nexus and it will type you notes, text messages and even meeting requests that you can send to your contacts without touching a button. Although this is very similar to Siri on the iPhone 4S, this will be rolled out to all android phones with Ice Cream Sandwich, so more users will be able to experience voice control.

The camera is 5-megapixel which is less in comparison to the Samsung Galaxy S2 is 8-megapixel camera but don’t be put off as megapixels are not everything when it comes to photography, The Galaxy Nexus also offers video recording with 1080p video playback.

Another cool feature to look out for is the unlocking system, HTC were very unique when developing a sliding code opener like a digital safe, The new unlocking system can be done by looking into the front facing camera where the smartphone can recognise your face and unlock.

Contract phone deals for the Samsung Galaxy Nexus can be found online on the network orange.

One thought on “Samsung Galaxy Nexus Review against iPhone 4S”