The Samsung Galaxy Y Pro (Young) has now been released in the Netherlands as the Galaxy Txt, this news is not the most interesting in the world but why did Sammy change the name for this country? We are not too sure why the name was changed.

The Samsung Galaxy Txt is now the name in the Netherlands, which is a mystery seeing as the smartphone is exactly the same. It will still feature Android 2.3 Gingerbread, GPS, Wi-Fi, 2.6-inch QVGA landscape display, 3MP camera, MicroSD card support, full QWERTY keyboard and Bluetooth 3.0.

Looks a little like a BlackBerry, anyway that’s another story. The Samsung Samsung Galaxy Y Pro (Young), sorry the Samsung Galaxy Txt will sell in the Netherlands for â‚¬163 unlocked. A few online shops are selling it already.

We will let you know if the name has changed from Y pro to Txt in other countries when we know more. So all those in the Netherlands, will you be buying the new Samsung Galaxy Txt smartphone?

You must have noticed that the Y stands for Young, this is because they are entry models for emerging markets or a younger audience more sensitive to price. There are other models as well with initials such as “S” (Super Smart), “W” (Wonder), “M” (Magical). We will let you know about each one soon. 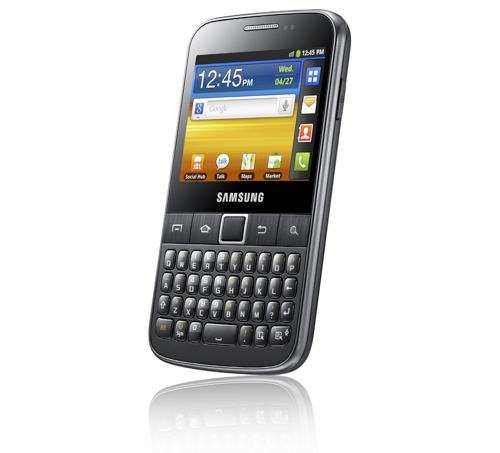