For those Android faithful over here in the United Kingdom who have had their eye on the latest Android smartphone out of the Motorola camp, the Motorola Droid RAZR and have been wondering if the handset will hit UK carriers anytime soon, the answer to that is yes, well at least O2 will be offering the Droid RAZR soon.

As you probably know, O2 UK will offer the first Android Ice Cream Sandwich handset, the Samsung Galaxy Nexus, and also the HTC Sensation XL, and now thanks to the guys over at Unwired View we now know that the Motorola Droid RAZR will grace O2 shelves sometime in November.

Obviously it is expected that that Android 4.0 packing Samsung Galaxy Nexus will be the big buy for Christmas, but if you do have a preference for the Android 2.3 Gingerbread Motorola Droid RAZR you’ll be able to pick up the device in the same month.

I’m sure you are also aware that the Motorola Droid RAZR is being touted as the thinnest 4G LTE smartphone in the world; however as the UK doesn’t yet have a 4G network obviously 4G LTE connectivity wouldn’t be a deal maker.

Obviously no hard and fast release date for the device on O2, and likewise no word on what O2 will be asking for the Droid RAZR, but hopefully the carrier will offer the device as a free handset on select contracts as seems to be the norm with UK carriers.

So are you hoping to pick up the Motorola Droid RAZR, Samsung Galaxy Nexus or HTC Sensation XL in November from O2? 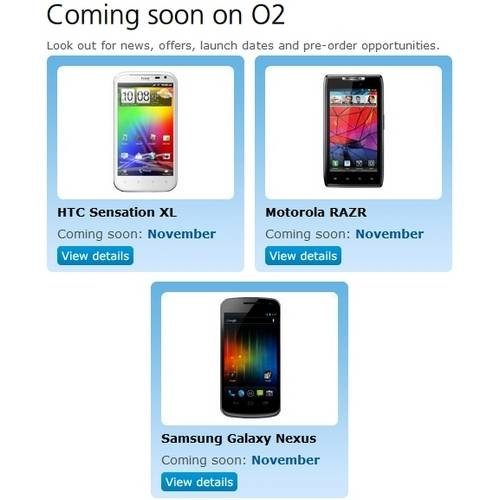