There’s quite a bit of news over the “Occupy” protests across the globe and now if you are one of the “99%” and own an iPhone or Android device you can connect with other protesters by way of the Protest4 iOS and Android app which are available from their respective app stores.

According to the guys over on The Next Web, once the user launches the Protest4 app they can create an account of sign in using their Facebook Connect account and apparently features options for search for a protest or even creating one.

According to the Protest4 website…” Read actual posts from protesters in the frontline as they happen. Protesters have already been telling us how it has enabled them to keep safe. It’s time to Protest4!”

Apparently each space has a wall where protesters can post images and messages and can also communicate with each other privately.

The Next Web guys say that quality of content is somewhat lacking, however most of the post are more informative although as a user can access and post to any protest regardless of where they are the Protest4 app could end up being somewhat of a rumour mill.

However on the other hand if users use the Protest4 app as it should be used it could be another tool in the activists tool kit.

A programmer behind the app, Jim Kent told The Next Web… “We created this free app because we love to communicate and we believe in freedom of expression. We had already been working on an app, called Zapon, that is able to identify interests that were trending in the mobile environment but after tracking social media usage by protesters in the Arab Spring and more recently with #OWS, we realised the functionality was perfect for protests and dedicated the app for the mobilisation of protesters around the world.”

So for any of you iOS or Android users that wish to get some activist action on, out there that want the Protest4 app you can download the iOS app from iTunes for free as well as the Android Market. 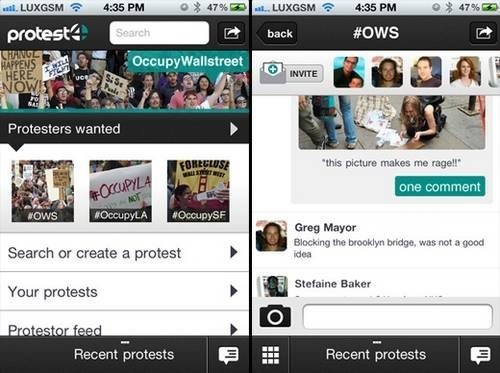 One thought on “Protest4 app for iOS and Android available”