The big Motorola DROID RAZR launch is about to kick off, and in store displays and demos are popping up now. The in-store displays are quite big and shows off a robots arm holding the device, with info underneath.

The displays show ‘4G LTE’ and ‘On Sale 11/11/11 at 11:11AM’, the store display shows that the Motorola Droid Razr is ultra-thin, November is going to be the biggest month of the year for Android phones, release such as the Galaxy Nexus and the Rezound are the reasons for this.

Verizon Wireless will have a very good last quarter, some stores according to Droid-Life will have demo units, and this is the temptation part where you have your little play with the device.

Wonder if this is true? 11/11/11 aka November 11, 2011 is Veterans Day also known as Armistice Day (The Great War), so this makes us wonder if Motorola is releasing the Droid Razr on this date and time to say to rivals such as the Apple iPhone, “This is where we at Motorola will give you a run for your money”.

Will you be getting your hands on the new Motorola Droid Razr smartphone when it releases on the date above? 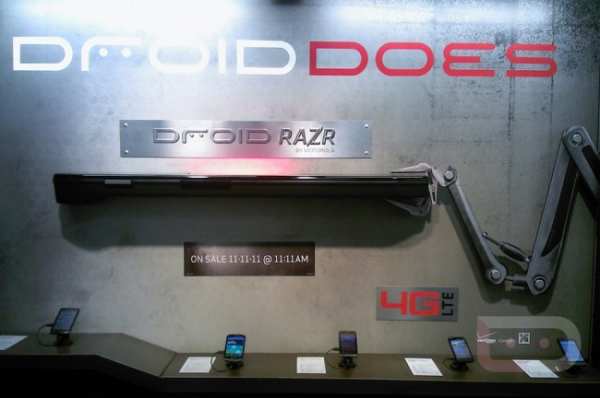